The Parish of Arley

In the Domesday Book of 1086 Arley was described as a farming area made up of several hamlets. Over the years all the hamlets merged into a single entity and at the centre was built the parish church of St Wilfrid. For six centuries it remained a farming community with a population of a few hundred. Then at the beginning of the 20th century things changed when a local business man started a mining company nearby. Mining the coal required skilled workers who frequently came from many miles away. To accommodate the new families six hundred houses were built a short distance from the pit. Shops and other facilities soon followed, creating a second community; one of the new facilities being the church of St Michael’s. By the 1930s the population of the combined communities had grown to over three thousand five hundred. Today the area around St Wilfrid’s is referred to as Old Arley and the area around St Michael’s as New Arley and together they make up the parish of Arley.

The Life of St Michael

St Michael is an archangel and therefore never had a human existence. He is mentioned by name at various places in the Old Testament where he comes to the rescue of the Jews. In the New Testament he appears in the book of Revelation. Where it says that on Judgement Day he will rid the earth of Satan and the dark angels. It is also claimed that he appears at the last moment of our life on earth to guide us on our way. 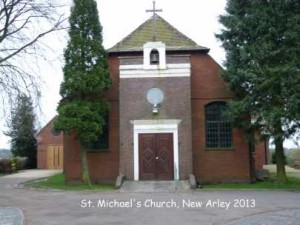 The above photograph of St Michael’s Church was taken in 2013. The path you can see on the left hand side leads to Arley Community Centre which was added in 2009. Although most people refer to the church as St Michael’s, its full name is St Michael’s and All Angels.

Like many churches built in the 20th century, it is a dual function building designed to be used both as a church and a hall. Above the main entrance you can just about see the church calling bell. Although it is some distance from the ground and clearly visible from the road, it did not deter someone from stealing it in 2004. 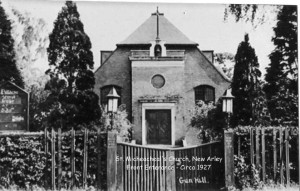 The view above is the one that would have greeted the worshippers when the church was first opened. It is hard to imagine that anyone could have foreseen the changes that were to take place in the area between 1900 and 1928.
What in 1900 had been a sparsely populated rural area had been transformed into a bustling mining community with a population of over three thousand.
Before looking at the history of St Michael’s we can travel back to 1900 and look at the events that led up to the church being built.

The Growth of Religious Facilities in New Arley. 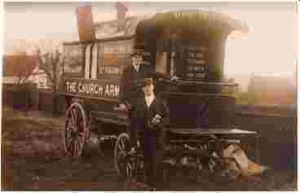 When the first mining families moved into the area the only local Anglican church was St Wilfrid’s. This would not only have been too small for the volume of people, it would also have been too far for young children to walk.
The first known religious event to have taken place in New Arley was in1906. In that summer a Captain Kemp and his assistant from the Church Army arrived on a horse drawn mobile mission van. The van, which can be seen above, was used for preaching in several local rural communities.
It was to be the start of a long relationship between the Church Army and the local churchgoers. Within the next 4 years, a Church Army Captain had moved to live in the vicinity. A further few years on and a purpose built prefabricated Mission Hall had been erected close by. The final link in the chain of events was the building of St Michael’s Church. Once again the Church Army was deeply involved. An Army Captain and his wife conducted all the services except for Holy Communion which was conducted by the Rector of St Wilfrid’s. The relationship with the Church Army continued until the 1950s.

Side view of St Michael’s Church 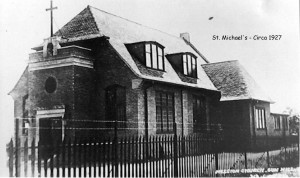 This photograph shows the south side of the church in its early days. As with any building, the years have taken their toll. Remedial work has been necessary on a few occasions. The first problem appeared just a couple of years after completion when it was found that the roof was too heavy and was forcing the walls outwards. Steel tie rods had to be fitted in the roof space to prevent any further damage.

Forty years later in 1975, the lead was stolen from the roof and, despite covering with a tarpaulin, water was dropping onto the floor below. At the same time the framework of the dormer windows was in a terrible condition due to rotting. Money was raised to carry out all the repairs at the same time. The roof was lowered and the dormer windows removed and then finally the tiling was done.

The most recent problem to have occurred was due to the church being built on waterlogged ground. The water worked its way down from local springs in the area. Although arrangements were originally put in place to enable drainage they were no longer fulfilling the job. Even with the flooring sitting a few feet above the water it did not stop the joists from suffering wet and dry rot. The whole area had to be drained and a pump fitted to prevent further problems. Then all new joists had to be fitted before the floorboards were replaced.

The New Calling Bell Fitted in 2004 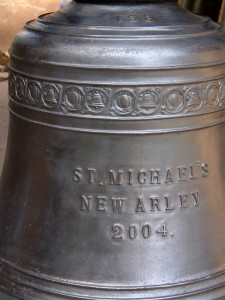 This is the replacement bell which was manufactured at a foundry in Loughborough, Leicestershire. Cast in the side are the words “St Michael’s, New Arley 2004”. 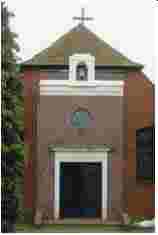 This photograph shows the bell back in its rightful place above the main door after being fitted by members of the congregation in 2004.

A Views of the Altar Taken from the Main Entrance 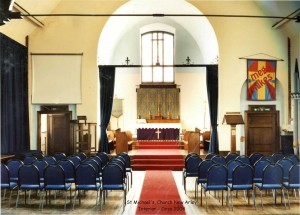 The exact date of this photograph is unknown but it is certainly before 2010 and the building of the Community Centre.

Although only a few rows of seats are shown the church does have a seating capacity of at least two hundred and fifty. In the top part of the photograph can be seen one of the tie rods that prevent the walls from leaning outwards.

The alcove containing the altar had to be taken down in 2009 in order for the community centre to be built. The wall was bricked up where the curtains can be seen and the altar repositioned by the steps.

Memorials Within the Church


The walls of the church have a few plaques mounted on them and each and every one of them has a story to tell about people who have played a major part in the building and running of St. Michael’s Church. Below are just a couple of examples. 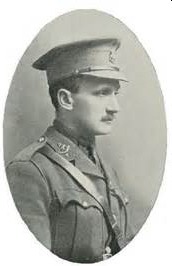 The man in the photograph is George Herbert Fowler who was the managing director of the Arley Colliery Company until his death. The uniform that he is wearing is that of a Lieutenant Colonel in the Sherwood Foresters. It was in this role he was sent to France in March 1915. In October that year he was killed trying to rescue a fellow officer near the German lines. He was then laid to rest in a war grave at Fouquieres. As a memorial to George Herbert and his father, George, the mining company paid for St Michael’s Church to be built. 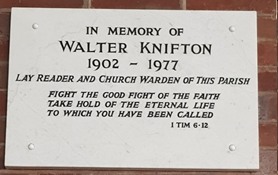 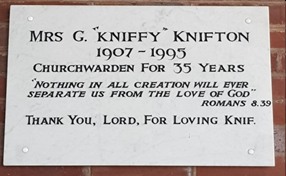 These two plaques are together as they commemorate a married couple who worked tirelessly for St Michael’s over many years.
The upper plaque is in memory of Walter who, as well as being a Lay Reader and a churchwarden, laboured to keep the graveyard neat and tidy. He won awards from the Warwickshire Rural Community Council in both the 1960’s and 1970’s for his efforts. In 1964 and 1965 he received a commendation of merit for the best-kept churchyard. Then in 1972 he was awarded a special commendation for maintaining a very attractive and well-kept churchyard over ten years.

The lower plaque underneath is for his wife Gladys who was known as ‘Niffy’. I have been told, by people who knew her, she was a lovely person who would always go the extra mile. She was a churchwarden for over thirty-five years, some of which would have been at the same time as her husband. Even when she moved away from the church she still continued as a churchwarden.

St. Michael’s has always been at the heart of the New Arley community. Local people remember with great affection all the events that have taken place through both the community centre and the church. Events such as dances, youth club Sunday school, Christmas and summer fairs and the fairly recent addition of Messy church. It is hoped that with the extended facilities that it will continue to do so for many years to come.